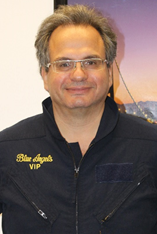 Advanced Numerical Methods for Scientific Computing
Speaker:
Charbel Farhat
Affiliation:
Stanford University (USA)
When:
Thursday 4th March 2021
Time:
17:00:00
Where:
Online seminar: https://mox.polimi.it/elenco-seminari/?id_evento=2035&t=763724
Link to recording:
http://youtu.be/fWwfykdF_KI
Abstract:
Current technology for decelerating a spacecraft from the high speed of atmospheric entry to the final stages of landing on Mars is based on parachute systems and dates back to NASA’s Viking Program. To enable future exploration missions featuring sophisticated robots and safely land heavier spacecraft on Mars, it must be advanced to a new level of performance at supersonic speeds. For this purpose, larger than before high-speed parachutes and inflatable drag devices are needed. Recently, it has become clear that the design, development, and maturing of such devices for future use at Mars cannot be performed by relying only on flight tests. It requires guidance from predictive simulations based on a high-fidelity, multi-disciplinary computational model for parachute inflation dynamics (PID) and drag prediction. The development of such a model is a formidable challenge. It must be able to predict various instabilities of a parachute such as flutter and pulsation, and assess the influence on its performance of several factors including material and geometric porosities, and the influence of temperature and strain rate on the stress field experienced in the supersonic regime. This lecture will discuss an ongoing effort at Stanford University, in collaboration with NASA and the Jet Propulsion Laboratory, for the development of such a computational model and some associated computational innovations. These include: a computationally tractable, data-driven framework for nonlinear, dynamic, multiscale modeling of membrane woven fabrics; a discrete-event-free, spurious-oscillation-free, and total variation diminishing embedded (immersed) boundary method for highly nonlinear fluid-structure interaction problems; a homogenization approach with subgrid scale modeling for treating porous wall boundary conditions; an energy-conserving, second-order accurate approach for enforcing transmission conditions at the interface between fluid and structural representations of disparate spatial dimensions; and a fast, massively parallel, load-balanced, adaptive mesh refinement methodology for tracking wall boundaries, boundary layers, and flow features such as shocks and wakes in an embedding domain. The lecture will report on some validation results for the simulation of the supersonic inflation dynamics of the parachute that landed Curiosity Rover on August 6, 2012. It will also highlight outstanding mathematical and numerical challenges associated with the simulation of PID from an initial condition where the parachute geometry is at bag strip, and with time-step restrictions induced by rapidly evolving fluid/structure interfaces. Work in collaboration with Phil Avery, Jonathan Ho, Daniel Huang, Sebastian Grimberg. Contact: Alfio Quarteroni, alfio.quarteroni@polimi.it
Note:
Charbel Farhat is the Vivian Church Hoff Professor of Aircraft Structures, Chairman of the Department of Aeronautics and Astronautics, and Director of the Stanford-KACST Center of Excellence for Aeronautics and Astronautics at Stanford University. His research interests are in computational engineering sciences for the design and analysis of complex systems in aerospace, mechanical, and naval engineering. He is a Member of the National Academy of Engineering, a Member of the Royal Academy of Engineering (UK), a Member of the Lebanese Academy of Sciences, a Doctor Honoris Causa from Ecole Centrale de Nantes, a Doctor Honoris Causa from Ecole Normale Supérieure Paris-Saclay, a designated ISI Highly Cited Author, and a Fellow of AIAA, ASME, IACM, SIAM, USACM, and WIF. He has trained more than 90 PhD and post-doctoral students. For his research on aeroelasticity, aeroacoustic scattering, CFD, dynamic data-driven systems, fluid-structure interaction, high performance computing, and model reduction, he has received many professional and academic distinctions including: the Ashley Award for Aeroelasticity and the Structures, Structural Dynamics and Materials Award from AIAA; the Lifetime Achievement Award and the Spirit of St Louis Medal from ASME; the Gordon Bell Prize and the Sidney Fernbach Award from IEEE; the Gauss-Newton Medal from IACM; the Grand Prize from the Japan Society for Computational Engineering Science; and the John von Neumann Medal from USACM. He was knighted in France in the Order of Academic Palms, appointed on the Scientific Advisory Board of the US Air Force, and selected by the US Navy recruiters as a Primary Key-Influencer and flown by the Blue Angels.
PDF: