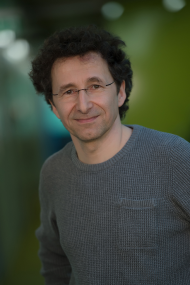 Advanced Numerical Methods for Scientific Computing
Speaker:
Ronny Ramlau
Affiliation:
RICAM, Austrian Academy of Sciences, Linz, Austria
When:
Wednesday 8th May 2019
Time:
14:00:00
Where:
Aula Consiglio VII Piano - Edificio 14, Dipartimento di Matematica POLITECNICO DI MILANO
Abstract:
The image quality of ground based astronomical telescopes suffers from turbulences in the atmosphere. Adaptive Optics (AO) systems use wavefront sensor measurements of incoming light from guide stars to determine an optimal shape of deformable mirrors (DM) such that the image of the scientific object is corrected after reflection on the DM(s). The operation of the AO systems of the new generation of large astronomical telescopes under construction requires new mathematical methods that achieve reconstruction in real time. In the talk we will in particular focus on methods for wavefront reconstruction from pyramid sensor data and an analysis of the atmospheric tomography operator. Contact christian.vergara@polimi.it
Note:
Prof Ronny Ramlau had his Diploma (1994) and his PhD (1997) in Mathematics in both at the Potsdam University, and did his Habilitation at the University of Bremen in 2003. He is professor for Industrial Mathematics at the Johannes Kepler University, Linz since 2008. Since 2013 he is Director at the Johann Radon Institute of Computational and Applied Mathematics (RICAM) at the Austrian Academy of Sciences, Linz. He is involved in many research projects either as PI or as collaborator. His main scientific interests are nonlinear inverse problems, regularization methods, medical imaging, industrial applications and mathematical methods in astronomy.
PDF: