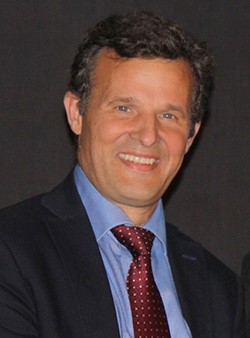 Advanced Numerical Methods for Scientific Computing
Computational Medicine for the Cardiocirculatory System
Speaker:
Javier Bonet
Affiliation:
University of Greenwich
When:
Thursday 14th February 2019
Time:
14:00:00
Where:
Aula Consiglio VII Piano - Edificio 14, Dipartimento di Matematica POLITECNICO DI MILANO
Abstract:
The presentation will review recent advances in the area of designing and using polyconvex energy potentials to describe the behaviour of solids in the large strain regime in the presence of several physical phenomena such as thermal or electro-mechanical effects. The need for convexity will be justified from the viewpoint of ensuring the existence of real wave speeds in the material at any state of deformation. The convexity of energy potentials with respect to an extended set of variables describing deformation and other multi-physics effects enables the definition of conjugate stresses, thermal and electro-mechanical variables and the formulation of complementary energy functions via the application of the Legendre transforms. In the static case, this leads to the development of a variety of Hu-Washizu or Hellinger-Reissner mixed variation principles that permit the discretisation of different fields with specifically chosen order of accuracy. For instance, in the case of nearly and fully incompressible materials, discretisations that either meet the LBB condition or are appropriately stabilised can be constructed. In the dynamic case, first order conservation laws can be derived for each of the extended set of variables in the energy function. Moreover, convexity enables the definition of a convex entropy-like functional of the primary conserved variables, leading to a symmetrisation of the conservation laws in terms of conjugate stress-like variables and a robust implementation of a Petrov-Galerkin discretisation process. This can be done in a variety of ways, for instance in the case of thermoelasticity two approaches will be discussed, namely, using the Hamiltonian as “entropy-like” convex function or, alternatively, using the so-called “ballistic free energy” as convex entropy extension. Several examples demonstrating the theoretical developments will be provided. contact: luca.formaggia@polimi.it
Note:
Professor Javier Bonet is the Deputy Vice-Chancellor, Research & Enterprise, at the University of Greenwich. He leads all aspects of Greenwich's research and enterprise activities, building on its existing success, as well as contributing to the strategic leadership of the institution. Previously Director of the Welsh government's Sêr Cymru National Research Network in Advanced Engineering and Materials, Javier Bonet was also Professor of Computational Engineering and Head of the College of Engineering at Swansea University. With a background in civil engineering, he graduated from the Polytechnic University of Catalonia in Barcelona, Spain, before coming to the UK to study for a PhD in computational mechanics at Swansea University. Since then he has established a strong reputation as a researcher in areas such as large strain solid mechanics, smooth particle hydrodynamics, error estimation and more recently the use of conservation laws in solid dynamics. He has published over 100 academic papers and co- authored a book on Nonlinear Continuum Mechanics for Finite Element Analysis, widely used as a graduate textbook across the world.
PDF: